Power in the palm of your hand. 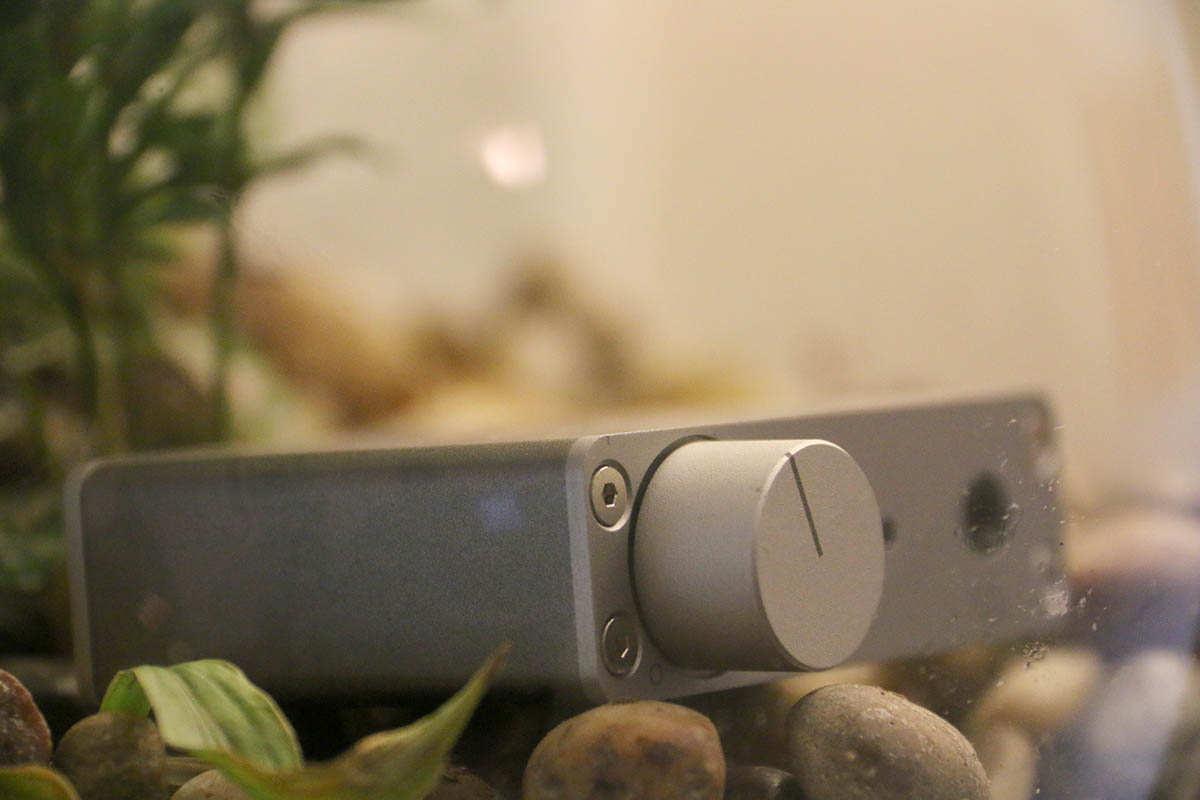 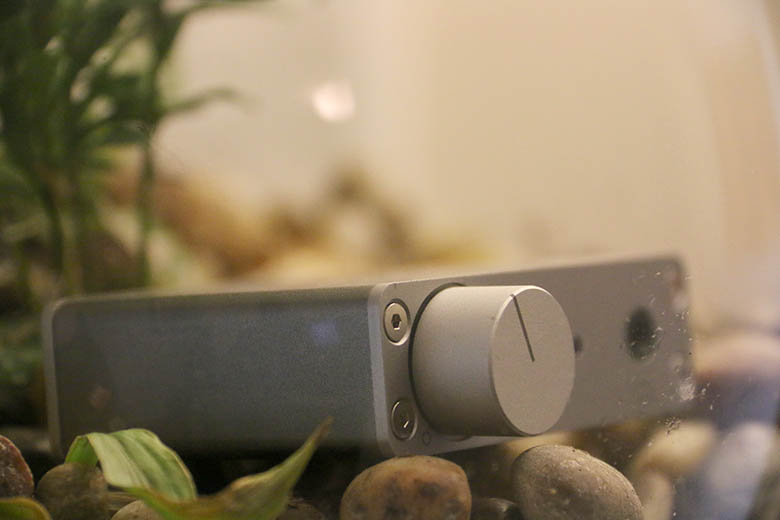 It’s not often that you can call a piece of audio equipment cute. You can with the Optoma uDAC5. When we took it out the box, our first thought was that someone was pranking us. This thing costs $200? This little hunk of metal that literally fits in the palm of our hand? We’ve heard of miniaturisation, but this isn’t a smartphone. It’s got no display, no cool buttons, just a single dual-function knob and one - count it - one light. But looks can be deceiving. In this review, we break down the uDAC5’s sound, design, packaging and accessories, specs and more. To see how it stacks up, see our list of the best DACs.

The Optoma uDAC5 pulls double-duty, as both a headphone amp and a DAC - a Digital-to-Analog Converter. However, it’s mostly marketed - and meant to be used - as a DAC on its lonesome (hence the name), so that’s how we’re going to evaluate it. And under that particular umbrella, it manages to provide some very decent sound quality, without taking anything off the table. This is most noticeable in the high-end, where elements of the music felt crisp, sharp and detailed. The DAC, like many of its kind, stays in the background and does its thing - but when we swapped it out for a different one (which we’ll talk about in a little more detail below) we found we definitely missed some detail. However, it’s worth noting that there were times where we felt things were a little bit too crisp, bordering on sterile.

We A/B tested this particular DAC with the Schiit Fulla 2 (full review here). We love both, and think they are excellent DACs, both with their own pluses and minuses. The Optoma may be more expensive ($149 to the Schiit’s $99) but it’s more portable than the Fulla 2, and we think that overall, it sounds just a little bit better. However, we must say that did prefer the bass of the Fulla - not dramatically so, but definitely enough to matter. The Optoma has a tight, compact low-end, to be sure, but we would have liked a little bit more forcefulness down low.

The Optoma uDAC5 has at least one killer feature: it handles DSD audio (here’s what that means). That’s definitely not a given in this price range, and it’s wonderful. In case you don’t feel like clicking on that last link, here’s a brief primer. A single album, released in DSD format, can run up to 2 GB in size; for comparison, an album imported into iTunes is between 70 and 100mb. The reason you don’t hear about this format more often is that very, very few artists actually bother to release music that uses it. The ones that do are mostly legacy acts, artists who have classic albums that are worth enough money for them to experiment with new formats. Think Miles Davis, John Coltrane, Bob Marley. To get their albums in DSD, you’ll not only have to download them from individual web stores like Acoustic Sounds, but you’ll also need a specialised (usually paid-for) desktop player like Audirvana Plus. iTunes is simply unable to handle them. The uDAC5’s party trick is that it has a special mode for ultra-high-resolution playback of these files. If you actually managed to get a DSD-ready album, and hook up the uDAC5, the white power light on the front will turn blue, and your ears will turn all the colors of the rainbow.

At TMS, one of our pet peeves is when hi-fi product reviewers talk about specific music that they used to test their gear, mostly because we feel that if you don’t share their tastes, what they are listening to will mean absolutely nothing to you. We’re going to break that rule here, mostly because DSD audio is so uncommon. We grabbed a copy of John Coltrane’s Love Supreme for testing, and…look, we won’t bore you with the details, but we will say that we felt like we were in the room. Not even remotely joking. We were standing next to the drummer. Coltrane was blowing a sax in front of us. It was that good. The uDAC5 has some of the better DSD playback we’ve heard, and definitely some of the best in this price range. The next-best, we think, is the Meridian Audio Explorer2 (full review here), and that costs at least $50. For the price, you get some wild audio quality here.

This part is probably going to be shorter than normal. After all, it’s not like there’s a lot of design to explore here. The uDAC5 is a two-inch by three-inch metal box with minimal features. You connect it to your Mac or PC via a USB cable; it works instantly on Macs, although PC users will need a separate downloadable driver. It’s small enough and light enough to fit in the palm of your hand, or unobtrusively on your desktop (if you’d rather not spend all your time holding pieces of audio equipment). More importantly, it’s built-well. The metal housing feels substantial, and the volume knob travels well enough. It’s no CHORD Mojo (full review here), and the unexciting design may leave you cold, but it certainly gets the job done.

Alongside the rear-mounted USB port is a stereo RCA input and a coaxial input, all of which are always-on once the unit is powered up. Ditto for the 3.5mm headphone jack round the front. Power and volume are provided by the single prominent knob, and there is a power light as well. It’s worth noting that this is a computer-based system only; it’s not set up the smartphone operation in any way, so don’t buy it if you’re looking for a DAC for your phone. If that’s the case, it may be worth investing in a portable amp/DAC combo, like one of these. And if we did have one criticism, it’s that there’s no line-level output - to turn things up to full, you need to put the volume knob all the way up. It’s not a huge deal, but it would have been nice to have this option.

Again, this is an area where we don’t have a ton to say - the packaging and accessories are as simple as you get. The box itself is decent enough: a white flip-top number that feels suitably premium, given the price you pay for the little guy. It could easily be repurposed to hold knick-knacks, if that’s your thing, but you shouldn’t feel bad about just chucking it (in the recycling bin, if you please). As for accessories, you get a short USB cable, and that’s it. Hardly lavish, but it’s not as if you need more than that to get things going, beyond an RCA cable. And if you’d like a DAC that comes with an included RCA cable, which you’ll need to connect to a separate amp, try the iFi Audio Micro iDAC2 (full review here). However, we should say that that package is significantly pricier - think $379 versus the iDAC5’s $149 - so you may be better off just buying your own!

The most obvious comparison is the Schiit Fulla 2. They even look slightly similar, in the sense of both being small silver boxes with prominent volume knobs. You’d go for the Schiit if you didn’t care about DSD, or portability. Beyond that, the differences are minimal - they both function as a headphone amp, although the Fulla has slightly better bass. It’s also cheaper, at $99 compared to the uDAC5’s $149.

If you want something a little more laptop or PC-focussed, try the Audioquest Dragonfly Red. This is more of a headphone amp than a DAC, but it does function as the latter if required. You will lose any external controls, however, so do bear that in mind. We actually really like this little gizmo, and we’re not alone - it’s sold by the truckload, and boosted the computer audio of thousands of happy listeners. It’s more expensive than the $149 uDAC5, at $199, but it’s worth it.

If you want something with a little more oomph, try the Meridian Audio Explorer2. At the time of writing, it’s not compatible with smartphones and tablets, which is a little bit annoying – but it does come with support for MQA, an audio format that you’ll find on streaming services like Tidal. It’s more expensive than the uDAC5 and identically priced to the Dragonfly Red, at $199, but it’s still a viable option.

The uDAC5 is actually one of the cheaper DACs that Optoma make. If you want something that takes things into a more professional realm, try the Optoma NuForce WDC200. It’s the uDAC5 on steroids: the same silver body, only a lot bigger, and with a lot more options. You get a real boost in sound quality, too, and unusually amongst DACs, even comes with Wi-Fi support. It’s around $100 more expensive than the uDAC5, though...

More on that. You could argue that the uDAC5 is overpriced, that $200 is too much to pay for a device that hangs its hat on a file format that very few will ever hear. But who cares? Even without resorting to DSD playback, the uDAC5 is a simple, effective device, with almost no downsides. Just shell out for the thing already, and thank us later. 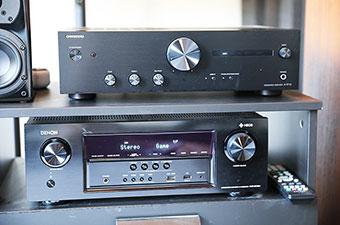 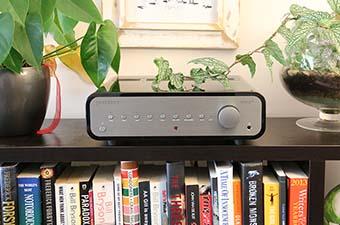 You want to know the reason Apple was so successful? The reason they, above all others, dominated the first fifteen years of this century and became a global juggernaut? They kept it simple. So does Peachtree Audio.